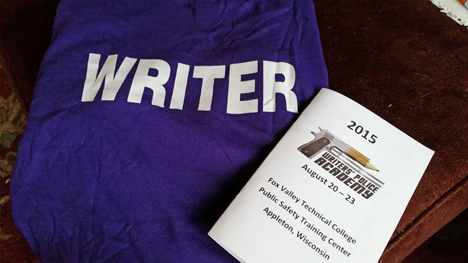 When I first heard about the WPA last year (thanks, Gina!) my excitement knew no bounds. As many of you know, I’ve taken many local citizen police and fire academy classes over the years, so this was right up my alley. Even more so, since it was being held at an actual law enforcement training facility. I couldn’t WAIT to sign up for this.

So let me start off with the bad – the registration process. After waiting months and months and months the schedule was put up a few days before registration was to begin. I was beside myself with the classes and special events being offered – everything from a ride-along with the sheriff’s department to a jail tour to live fire exercises with pistols and rifles to skid pad and PIT maneuvers to firearm simulation training to crime scene photography. I wanted to do it all!

But guess what? Suddenly it was sprung upon us that oh no, you can’t actually take all those classes! Most of them are by LOTTERY ONLY. And the others? You have to PAY EXTRA for OR you can only choose ONE. To say I was upset was an understatement. Things only got worse the day registration opened. We were told repeatedly that all 300 spots sold out in a matter of hours all the previous years so you needed to be online the instant registration opened. Which I was. It was a huge form to fill out and you had a split second to decide what you wanted to pay for, what you wanted to be put in the lottery for and what ONE special class you wanted to take. I filled the entire thing out and guess what happened? Their system crashed. REPEATEDLY. I had to fill out the form THREE times. By that time it was too late. I missed out on signing up for everything I wanted except for one thing, the firearms simulation (MILO). All other spots for everything else were already filled. I was honestly in tears at that point I was so upset. I looked on Facebook and saw that many people were complaining about the system crashing so it wasn’t just me and my computer.

Having now missed out on everything I wanted to do plus not winning ANY of the lotteries, I could’ve honestly cared less about going anymore. I went from vibrating with excitement to anger and disappointment. That was back in February. By the time August rolled around I still wanted to cancel going. But I was supposed to drive my friends Chris and Piper, so I was stuck.

Now that we’ve gotten the bad out of the way let’s get to the good….

The WPA was held at the Fox Valley Technical College/Public Safety Training Center in Appleton, Wisconsin. It’s a brand new facility that just opened up in January. It’s state of the art with dozens of classrooms and forensic labs, fire apparatus bay and burn tower, an actual 727 airplane, railroad tanker cars, skid pad, indoor/outdoor firing ranges, K-9 training area, a fake jail with booking area, a firearms training simulation room, and a fake town complete with gas station, motel, bar, bank and houses. Law enforcement agencies from across the country and even the FBI now train there. I believe we were the first public group invited to hold a conference there.

There were so many standard classes offered that it was hard to choose which one to attend each hour. In the end, these are the ones I went to:

•  From Crime Scene to Autopsy – this was taught by the actual county coroner. She was great. She took us through the steps of what she does when she arrives on scene to coordinating with the medical examiner for the autopsy to determining final cause of death. She also had some pretty gruesome pictures and stories for us. 🙂

•  Burning Building Search and Rescue – one of my three absolute favorite classes. After a very informative presentation by the fire instructor we were taken out to the fake bar and motel. In the bar we were given instructions on what we were going to do, how we were going to navigate our way through the smoke-filled motel lobby and find our way out the back door. You literally couldn’t see the hand in front of your face. We relied on the infra-red camera we had to feel our way down the hallway. It felt like we were in there forever! Loved every minute of it.

•  Bloodstain Pattern Investigation – we got suited up in an apron, hair net, mask and gloves for this one! One of the best instructors taught this seminar. He showed us examples of blood spatter patterns from arterial spay to high impact and how to calculate angles and distance to determine exactly where the victim was and in what position they were in, along with their killer. We also got to use an actual kit to test samples to determine if they were human blood.

•  Firearms Simulation Training (MILO) – my favorite class, the only special one I got into that I had to pay extra for, but it was worth it. I was supposed to be in there with someone else but they didn’t show, so I had the entire 15 minutes to myself. I was given a Glock that was modified for laser shooting and run through many different “shoot-don’t-shoot” scenarios, the ones the actual police academy students go through. It’s stressful! LOL! But I did extremely well. The instructor told me my shooing was “very impressive” (nailed the bad guys center mass or in their head, never missing), along with my reaction times and my reasons to justify why I took the deadly force action I did. Left that class with a huge smile on my face!

•  Microorganisms That Kill – fascinating panel on how killer bugs like ebola, small pox and anthrax work, along with how the different bio-safety labs are set up and how they go about testing using gram stains and PCR and even DNA.

•  Crime Scene Photography – this was the one “special” class I was allowed to choose to take at no extra cost. Had a great instructor for this one, too. He took us through step-by-step as to how a crime scene is documented with photographs, how to properly use the rulers for scale and all the paperwork that goes along with it. Then we were let loose with our own cameras in one of the five different rooms in the motel where a fake crime scene was set up for us. I had a great time in this class.

•  Advanced Fingerprinting – I’ve taken many fingerprint classes and used regular dust to lift prints, so I wanted to learn new techniques. This class was taught by the same great bloodstain instructor. Once again we got into our aprons and gloves. We learned how to use super glue fumes to lift prints from plastic and how extremely precise you have to be with the amount of glue you use and the time you fume. Then we lifted prints from a metal bar that had been submerged in water. Amazing that can be done! Then we lifted prints from the sticky side of duct tape using wet powder. Then we used a chemical bath to lift prints from a piece of paper. Loved every minute of this class.

•  K-9 Training – this was a fabulous hour with Officer Zill and his German Shepherd named Franz. We had a great Q&A session first and then we went outside. Franz then showed us his skill at sniffing out drugs on both the outside and inside of a car, followed by another officer suiting up and Franz demonstrating his skill at running down a suspect and grabbing onto his arm with his teeth.

All of the classes were taught by the actual instructors at the college and they were amazing. No matter what kinds of crazy questions we writers threw at them they had an answer. We also had the good fortune of being there on the last day of the actual police academy, so we got to watch the students perform many different simulated traffic stops out in the fake town.

Most of the classes I took were hands-on. I loved learning and doing the actual techniques that law enforcement officers and forensic labs do. The main point of the WPA is for research, and it accomplished that in spades.

A few quibbles I had – I wish that the instructors had waited to ask for questions at the end of their presentations instead of taking questions along the way. None of the instructors I had ever got to finish their presentations and that disappointed me. I wish the conference had been three full days instead of just two. Do away with the wrap-up panel Sunday morning and offer classes instead. There were too many offered and too many I didn’t get to go to. And because it was only two days it made for exhausting days running non-stop from 7:30 am until 10:00 pm. Find a different way to do the raffles and silent auction at the banquet. It was ridiculously confusing with the papers and spreadsheets to see if you’d won. I also thought the $55.00 extra we had to pay for the banquet for a mediocre chicken dinner was way too expensive.

But at least the banquet ended on a high note as the story I submitted to the Golden Donut Contest won Honorable Mention! (see my previous blog post)

In the end I’m glad I went, despite my disappointment at basically getting nothing I wanted to sign up for. The classes I did get to were extremely good and the FVT facility is top-notch. I believe it’s going to be held there again next year. Since I would think the classes would be pretty much the same I’d go back one more time to take the ones I couldn’t this time. I also now know to not get my hopes up because of the ridiculous lottery and pay classes.

I took a whole bunch of photos and thought I’d share some of them with you…. END_OF_DOCUMENT_TOKEN_TO_BE_REPLACED