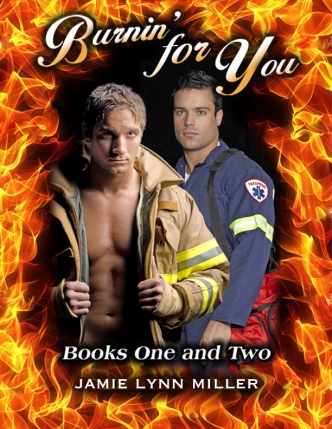 For this week’s Throwback Thursday I wanted to show some love to the book I had the most fun writing, and that is also my best selling – Burnin’ for You. Why? Because I did a whole hell of a lot of research on it, taking a 14 day fire academy class. It was one of the most amazing experiences of my life.

BURNIN’ FOR YOU / WHERE THERE’S SMOKE:

BLURB:
Lucas Taylor is a hard-working New York City fireman at Station 127, dedicated to his job, even though it has brought him heartrending tragedy – the loss of his lover, Ryan, in an explosion a year ago.

Evan Singer is the new guy in town, a paramedic transferred into Station 127 from San Antonio, and he sets his eyes on Lucas from the get-go.  Neither knowing who the other is, their first meeting is explosive, a night of passion and desire that awakens something inside Lucas he never thought he’d feel again.

But when Lucas discovers that Evan is a paramedic, it all comes crashing down. For despite the feelings he has for Evan, Lucas has vowed to never again get involved with someone on the job, after losing Ryan to it.  Can Evan convince Lucas to open up his heart and take a chance on love again, despite who Evan is?

Includes the sequel WHERE THERE’S SMOKE:

It’s five months later and Lucas is nearly a full-fledged paramedic. But becoming a medic means no longer being able to work with Evan at Station 127 and giving up his chance at a promotion to Lieutenant. As graduation looms, will Lucas change his mind? Then add in a young man Lucas rescues from a fire that becomes an obsessed stalker, and Evan’s altercation with a victim’s husband that threatens his career, and things turn explosive at the FDNY.

This site uses Akismet to reduce spam. Learn how your comment data is processed.